Britney Spears and Sam Asghari have tied the knot!

The couple confirmed their happy news through Sam’s rep, Brandon Cohen, who shared the following statement with The Hollywood Reporter:

“I am very ecstatic this day has come, and they are married. I know he wanted this for so long. He is so caring and supportive every step of the way.”

The ceremony took place at Britney’s home in Los Angeles in front of a small gathering. She revealed earlier in the year she’d been working with fashion house Versace to design her ideal gown.

And while we’re hoping it was the happiest day of their lives so far, unfortunately, the day did begin with some drama – Ventura County Sheriff’s Department confirmed they received a 911 call for a trespassing complaint at the venue and responded, finding Britney’s ex-husband Jason Alexander there.

He had been live-streaming his plans to crash the wedding on Instagram and it seems a number of Britney’s fans were able to alert her assistant, Vicky T, who shared a statement afterwards in her Insta stories:

“I’ve done everything I can while being out of the country to keep everyone safe. Thank you to all the absolutely amazing and incredible fans for alerting me of so much. You are blessings. Thank you. Everyone is safe. Truly y’all are heroes for commenting and tagging and making a fuss about this. That could’ve really gone much worse and you played a part in keeping her safe. Thank you.”

Britney and Sam have been engaged since September 2021. He proposed with a 4-carat, round, brilliant stone in a platinum cathedral setting with pavé detailing on the bridge and diamonds on the prongs and basket. And the sweetest part – there’s a little engraving on the inside which reads “Lioness”, the nickname Sam often uses for Britney. 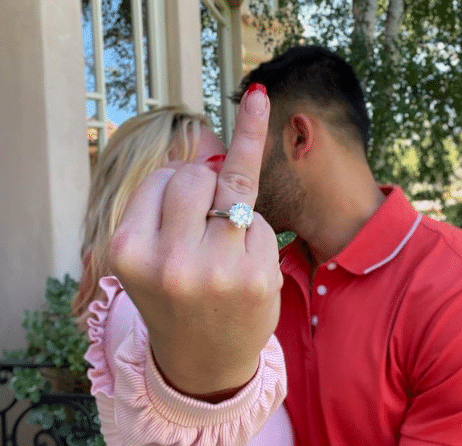 They met on the set of Britney’s “Slumber Party” music video back in 2016, began dating shortly afterwards and have stuck together through all the ups and downs of the conservatorship… of which she’s now freeeee!